Japanese dances in the early periods were gestures performed in groups in symbolic ways. People stamped the ground rhythmically to call the good spirits and push the evil down to the ground. Farmers danced while they worked to express their way of life including fishing, mining and simple pleasure in the daily life. Minyo/Folkdance was developed from this foundation to become more symbolized artistic forms. Minyo normally consists of repeated gestures and motions typically observed in the farming and has a number of variations depending on the region it was developed. People performed folk dances for joy as their expression of love for nature and its simplicity.

These traditional dances are prevalent even in the modern society where Japanese populace are accustomed to the way of thinking that is greatly different from those days they originated. These dances represent Japanese philosophies, cultural heritage and everyday customs which are vital elements to develop Japanese into the ones they are today. Above all physical expression played pivotal role to preserve the core part of Japanese culture. 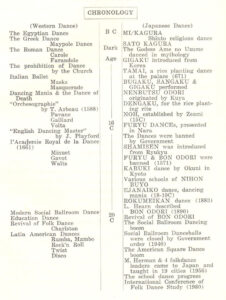